The daily routine is pretty straight forward. You are paid to look for fires and if there are any……then you are paid to monitor them. About every 20 minutes, I would walk around outside the LO with my binoculars scanning the view. Your mind memorizes the patterns, colors and relationships and after a few days you can pick out anything that is different. At times I was amazed at the unconscious accuracy of this…… I was sitting at the desk one afternoon and my brain registered a very small patch of white where it had not been. So I reached for the binoculars on the firefinder behind me and focused on it……but it wasn’t there. I knew that exact spot though as the only place close to the lookout that you can see the trail……a six foot opening in the trees about 300 yards downslope. Someone hiking along would only been in that window for only a few seconds ……but I have learned to trust my visual instincts ….so I thought maybe a hiker would appear at the LO in five minutes or so…..and sure enough….my son with a white T shirt soon appeared at the doorstep grinning away. This sort of gestalt I think is buried in us genetically –eons spent hunting and being hunted and when all the distractions of living in the city are stripped away……it is uncovered, and the signals get thru to our consciousness.

There is another facility like that that comes out up on any of the lookouts I have been on……you can sense when large animal like a human or bear is around even if you haven’t seen or heard them yet. And if they are staring at you, you can sense that too. Occasionally coming back from the privy, I would feel a human presence but couldn’t see anyone. Then as I got close there would be a hiker or two on the far side of the LO peering down at the lake or eating their lunch.

From the top of Desolation you can see a long way. Obvious fires stand out easily. But frequently you are looking at something near the limits of your visual resolution. Unclear if it is there or not. So I ask myself – Is it truly new? This is where pattern memory feels like intuition. Does it have a bluish tinge like smoke? or is it whiter……like water vapor? If it seems to have a bluish tinge…. then is there a column or is it more diffuse? Is there a campground anywhere near that would explain it? Could this just be a campfire not a wildfire? But even that would be suspicious in the North Cascades since in July or August…. campfires are prohibited anywhere in the backcountry. If it is not near a campground……then is it near a trail crew that is working? Monitoring the radio all day I puzzle out their locations by their occasional transmissions and keep track. If there was any lightning the night before I would be extra suspicious. I find that early morning is a valuable time to be looking as the air is clearer. And if I am unsure…. I keep watching the spot and if it is a fire it should continue to put out the smoke… at least intermittently. Sometimes they will “lay down” or go quiet at night and then begin to puff again in the daylight.

When I first wake up — I sit up and do a quick look around to check for smoke. Then I climb out of the sleeping bag, dress and go outside – doing a careful walk around scan with the binoculars. If all is quiet, then next up is breakfast. For me it is usually Muesli cereal with water. Regular milk is too heavy and perishable to haul up and I don’t like the taste of powdered milk. The Museli sticks with me. If I am in a celebratory mood, I will cut up one of my stash of 4 sugar cubes and add a slice of sugar. But usually I save any sugar for my tea……licorice tea which is the second step. I heat a little water on the propane stove, pour it into the old mug holding my used tea bag ( I make them last 4 dunkings) , hold the warm cup in my hands, smell the licoricey steam and slowly sip it —enjoying the quiet cool morning. Later I brush my teeth out on the rock — spitting into the void.

At 8 am or thereabouts, I check in with Fire Dispatch for the day.

All day I listen to the radio which is very much like an old-time party line back on the farm. Though the transmission is between two people…..everyone hears it. I keep up with everything going on in the park ……you recognize the voices and if they are backcountry rangers (who roam around)…..they will often mention their current locale and their plans for the next few days.

Some years ago, when I was working the Sourdough LO—- I heard an exchange between a backcountry ranger who was going to hike into the Copper LO later that day and the current Ranger at the lookout, a woman of few words.

At 9AM each morning comes the weather report put out by the Communications (Com) Center. This I await with great anticipation since it affects me big time if a change is coming, especially if thunderstorms are forecast. It is broken into an Westside report and an Eastside report which is for the North Unit and South Units of the Park respectively. Because Desolation is so high, I can hear both the Ruby Mountain and the McGregor repeaters and get both reports. The transmission always reminds me of that line from the Paul Simon song “All the news I need, I get on the weather report “

Once breakfast, check-in and the weather report have been enjoyed, I feel good……all fed and caught up. Then out to do another walkaround studying the terrain now that people have woken up and are out on the lake, hiking and moving about. The flies too will be getting busy and Trouble the resident marmot will be out prowling around checking again for any tidbits left that he missed from yesterday’s hikers. He usually gives me a quick glance and then goes back to his rounds. The smaller marmot who I call Trouble 2 is patrolling as well but defers to Big Trouble if the two are near each other 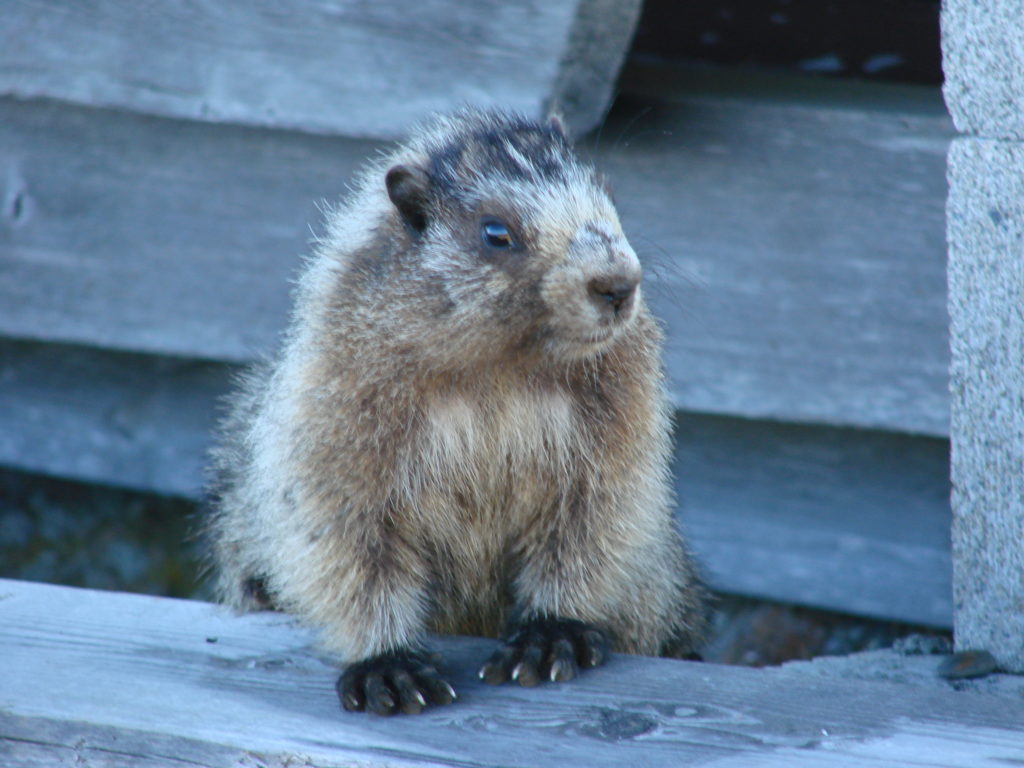 Occasionally I would see him at the door with some scheme he wanted to go over before the hikers arrived and would think of that line from the Eric Clapton song…. 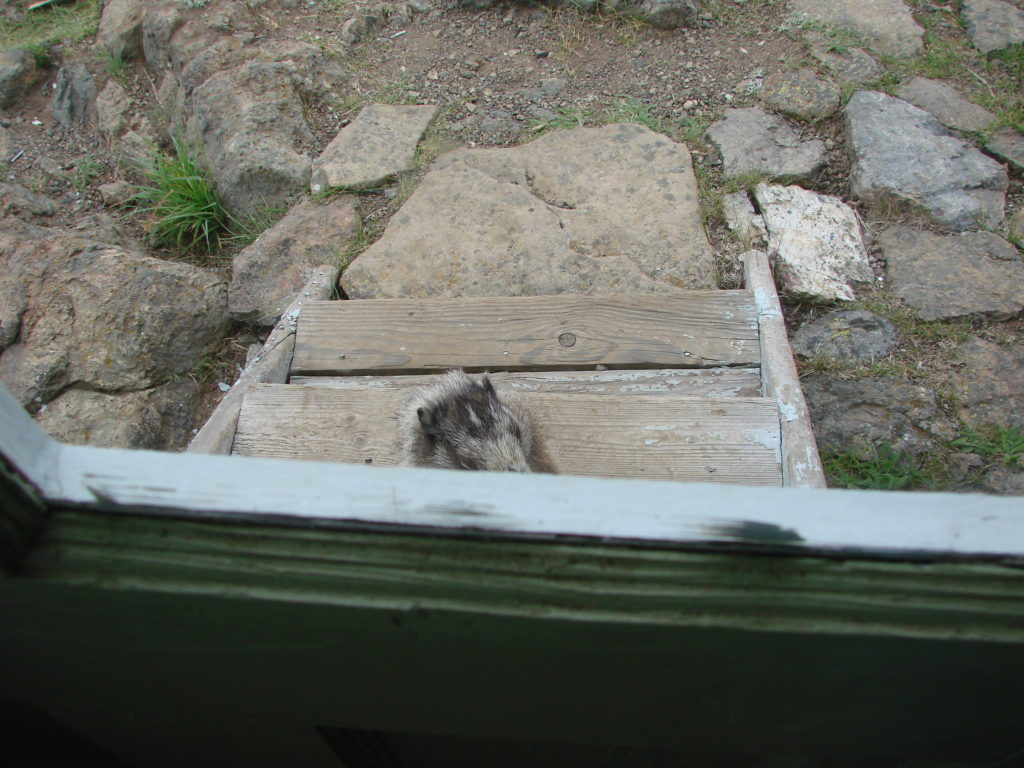 One day a youth group was up and I warned them about the marmot and not to leave anything on the ground…………about 3 minutes later I heard one kid yell  ”  Hey, hey you guys —- here comes Trouble “ 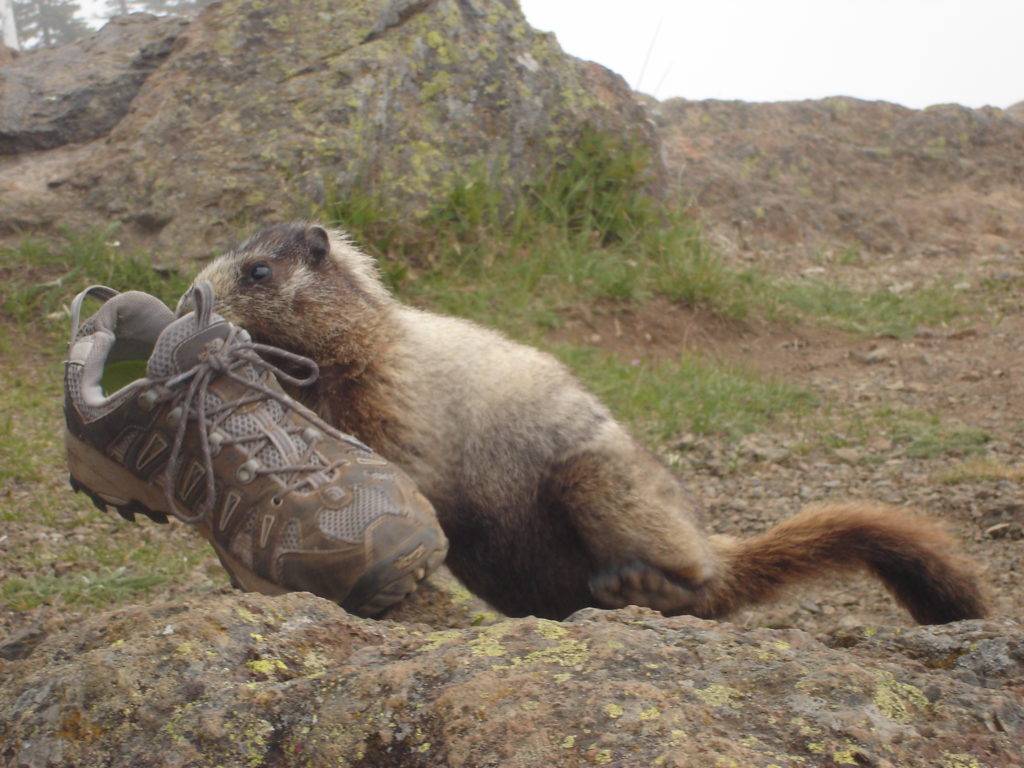 Even 3 years before I was there — Trouble was up to mischief…….as I saw in the Deso guestbook…..

At some point, nature calls and I have to contend with the privy. It sits on the edge of cliff about 60 feet east of the LO. It has 2 wonderful advantages: a seat and incredible view of the Payasten Wilderness with mountains and high meadows as far as you can see to the east. Being able to sit at Desolation rather than squat in slippery inclined heather like over at Sourdough is wonderful. There are no walls though, so I am just sitting out in the open……. and have plenty of time to do my business. But there are some challenges. When it’s cold….the seat feels frozen and my buttocks registers the cool breeze between my legs. If its windy, I need to hang on to the anchoring cables so I won’t go hurtling over the cliff with my pants at my ankles. If it is hot…..the mosquitos and horseflies will quickly find you from underneath and begin drilling holes in your white fleshy virgin cheeks. They live down in the compost below the seat and it is hard to defend myself from such an angle of attack. Embarrassingly, if the urge comes in the middle of the day……..you may find yourself with a group of hikers staring down at you. There is something about sitting down on that privy that seems to attract hikers even when I haven’t seen anyone approaching….. 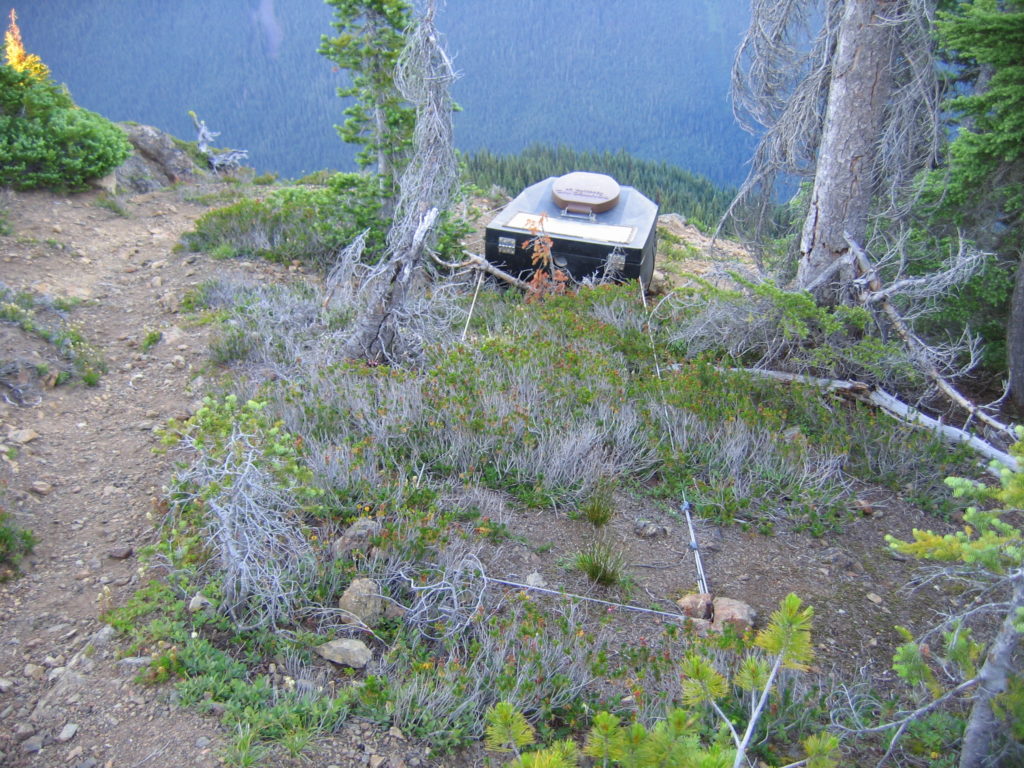 Every few days I do my laundry in one of the cooking pots and hang the wet clothes on the shutter braces. It doesn’t’ take long for them to dry in the heat…. ending up nice and stiff. If a wind comes up though you have to be careful to watch that the clothes stay put because if they drop to the ground, the marmots will carry them away pretty quickly. 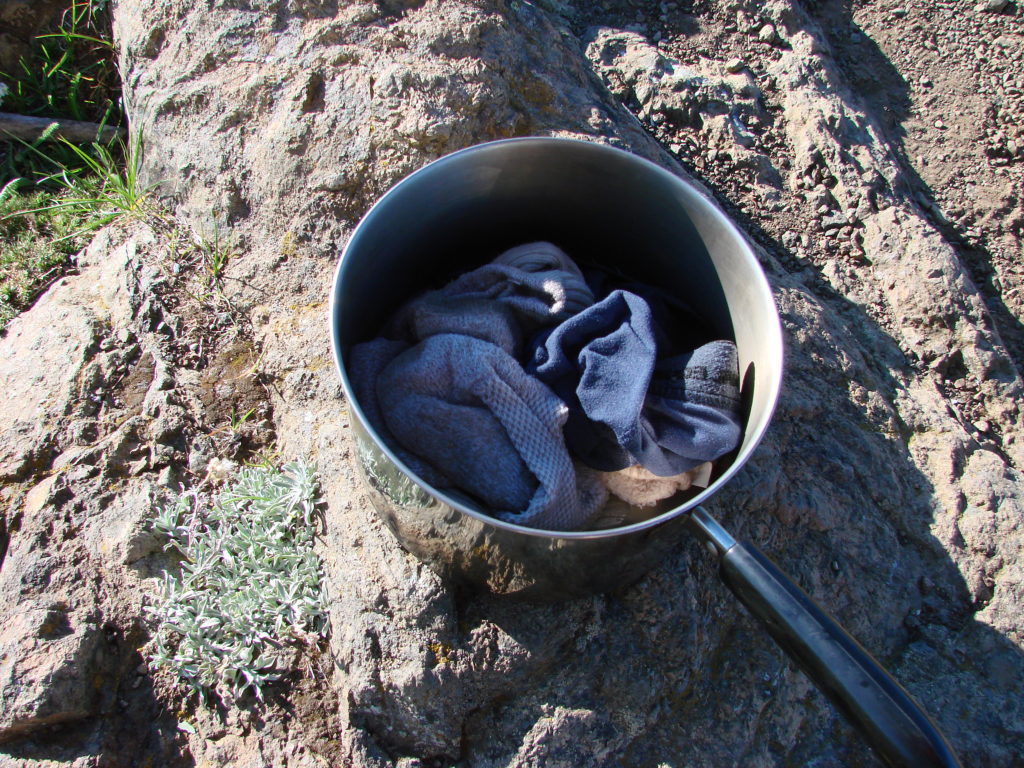 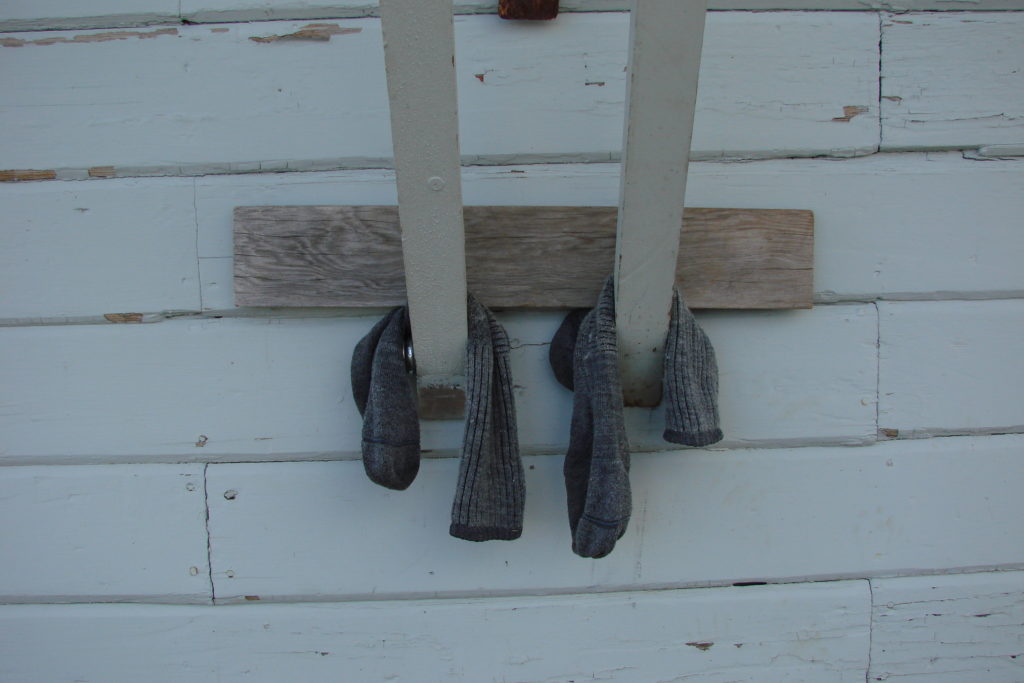