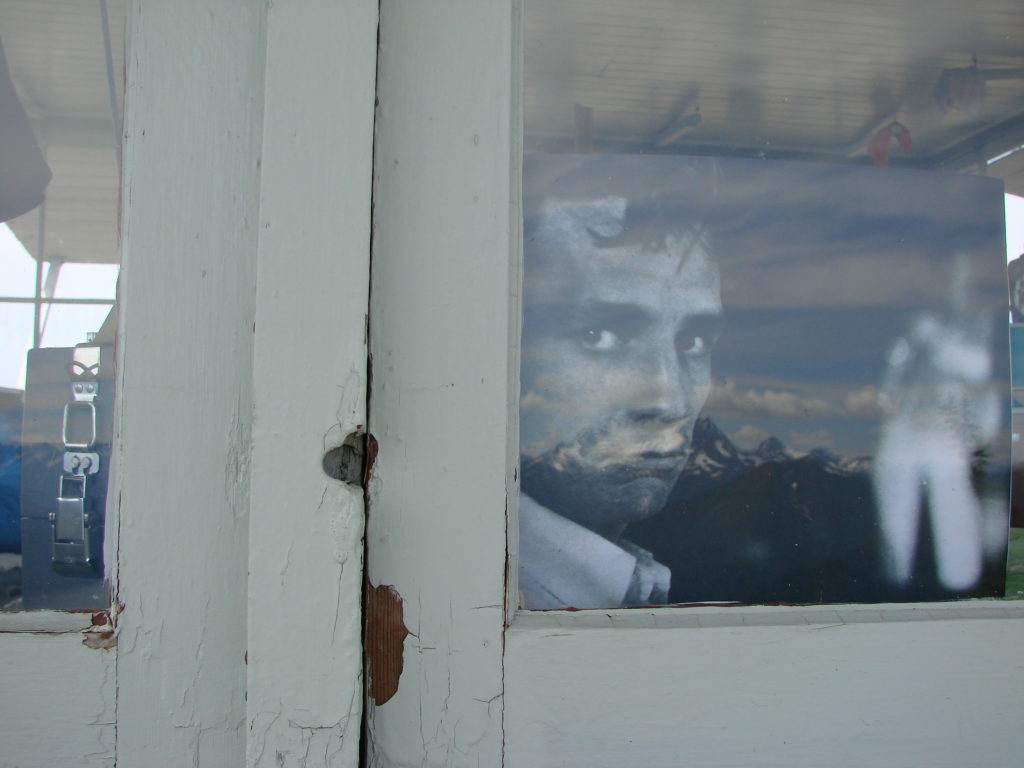 Jack Kerouac was a complex person and unique writer. He grew up Catholic but later in life extensively investigated Buddhism. Overlaying this was a string of functional and dysfunctional relationships both male and female, combined with binges of drugs and alcohol. Regrettably his continued abuse of the later led to his death at 47. The interplay of all these factors has been written about endlessly…. but it doesn’t interest me.

What I admire and am astounded at……is his ability to describe the essentials of a scene. To do this he had to invent a new style of writing…..which he called “spontaneous prose” and other people refer to it as “stream of consciousness ”. As an example here is his description of his days at Desolation:

“on long afternoons I would sit in my easy chair facing void Hozomeen, the silence hushes in my little shack, my stove still, my dishes glitter, my firewood ( old sticks that are form of water and whelp, that I light small Indian fires with in my stove, to make quick meals ), my firewood lies piled and snaky in the corner, my canned goods wait to be opened. my old cracked shoes weep, my pans lean, my dishrags hang, my various things sit silent around the room, my eyes ache, the wind wallows and belts at the window and upped shutters……” ( Desolation Angels , p 6 )

((If you want a tour de force on how well he could describe —check out his word play on the sound of the ocean in his book — Big Sur... )) 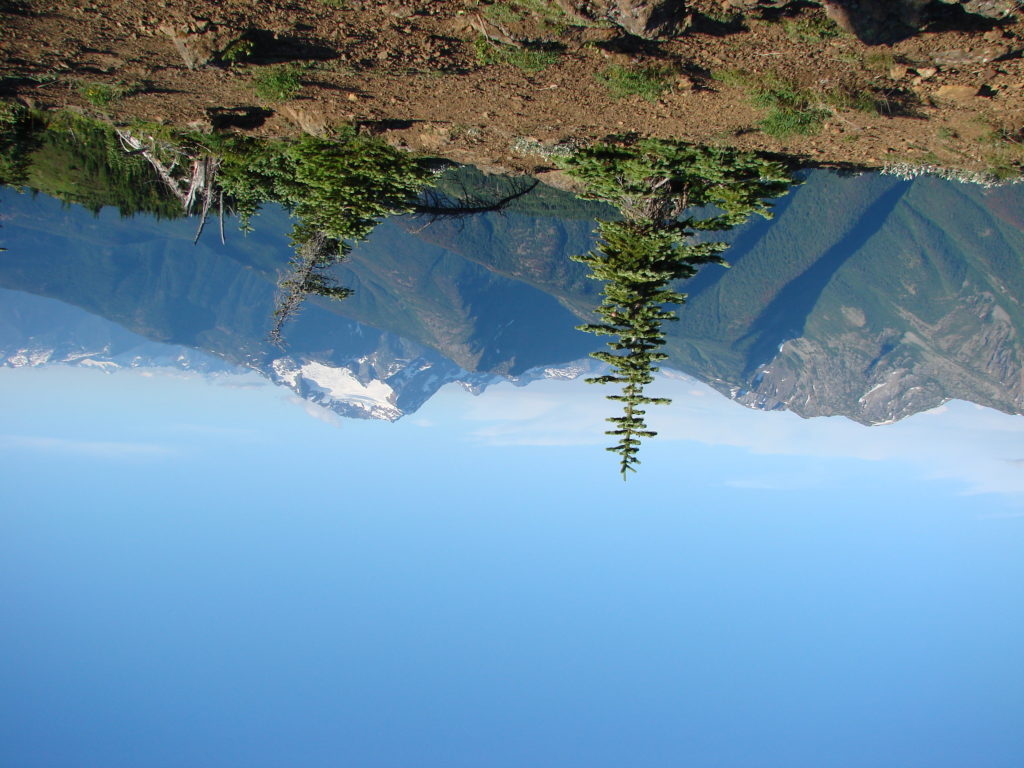 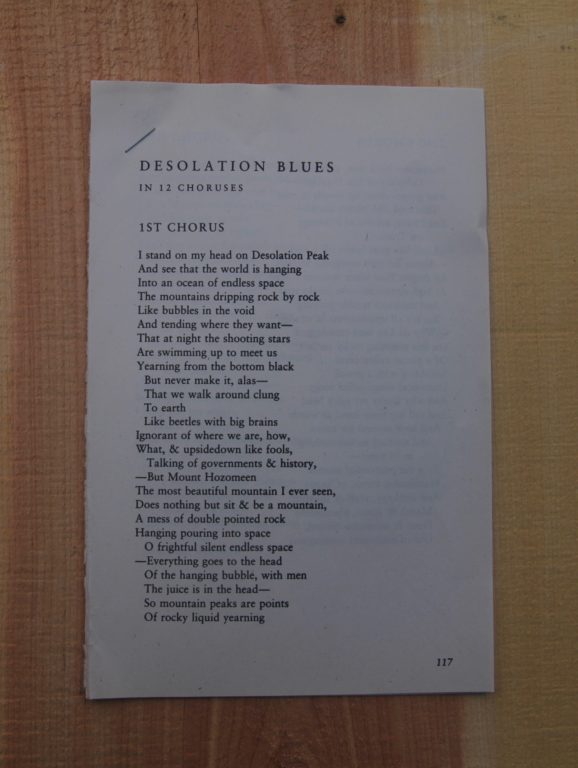 Kerouac wrote often about the VOID on Desolation, particularly in reference to Hozomeen Mountain just to the north. Exactly what he meant is not clear. Jerry Cook, the Ross Mule captain who gave me a ride up lake and spent a summer on Desolation — believes it relates to the old circular map on the Osborne firefinder……the north 1/3 of which is blank ( or void ) 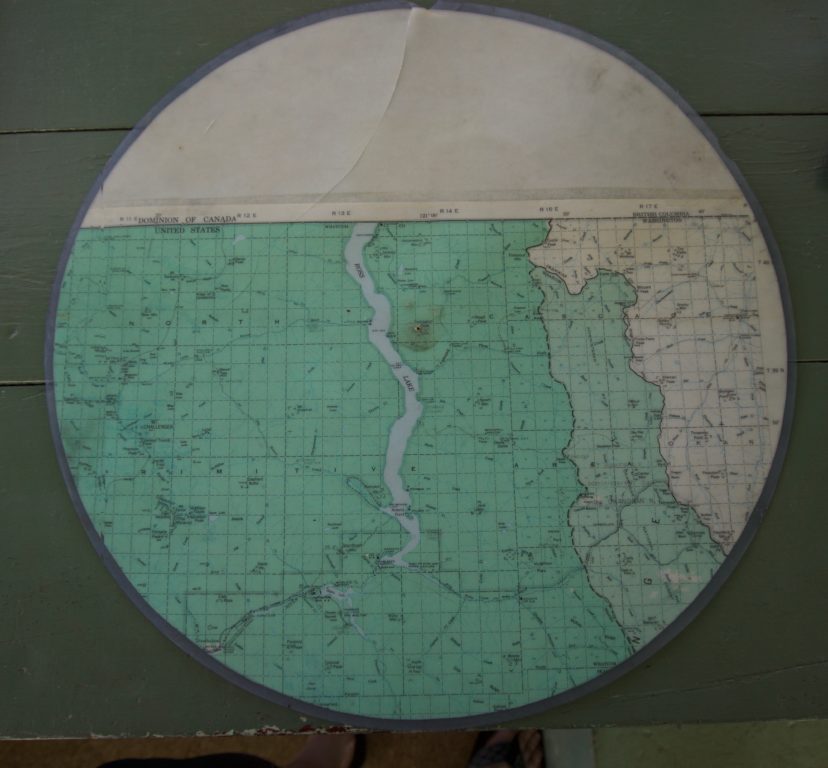 because it is in Canada…..i.e. “over the border” and thus not on a U.S. Forest Service Map. Other folks think it was more along the lines of a Buddhist concept of the unknowable or the place we come from before we are born and where we go after death. In the end each person defines it for him or herself……that I think would have pleased Jack.  This is looking at Hozomeen from the LO after sunset. 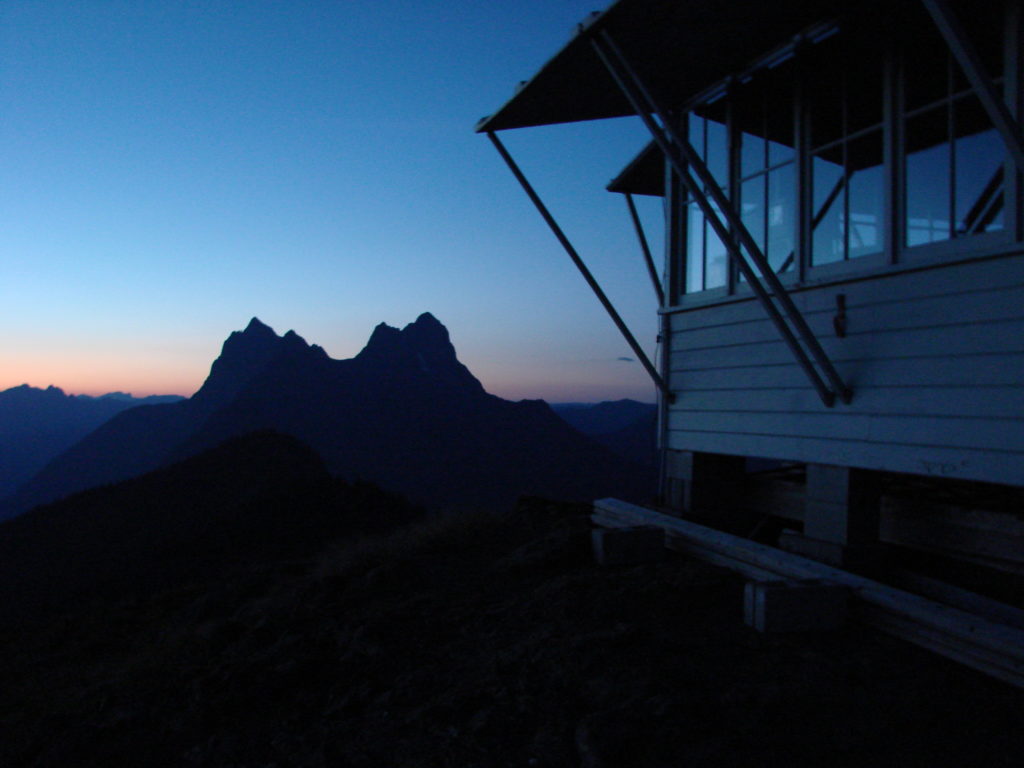 As a dermatologist in my other life—I often excise skin cancers. To distract the patient who is usually awake during the surgery, I will ask them questions. One time to my surprise I found myself operating on a retired astrophysicist. Given this gentlemen’s background, I thought I would ask him some “big” questions. “Is there a God?” I asked. And his answer came easily : he said “Yes, there is—– God is the set of laws that govern the universe” Now I had always envisioned God as a being…… but this was entirely different…… so then I asked him “Who invented the laws ?” And he said….” No one……they are intrinsic to the universe, a condition of its existence.” I wasn’t sure this really answered the question but Kerouac was given to pondering metaphysical questions too. I think he would have enjoyed the interchange with this fellow.

Kerouac also had visions of the future, insights worth remembering 50 years later.

One was the homogenization of the entire population’s life view………..

” You’ll see what I mean, when it begins to appear like everybody in the world is soon going to be thinking the same way and the Zen Lunatics have long joined dust, laughter on their dust lips. The one thing I will say for the people watching television, the millions and millions of One Eye: they’re not hurting anyone while they’re in front of the Eye. But neither was Japhy……I see him in future years stalking along with the full rucksack, in suburban streets, passing the blue television windows of homes, alone, his thoughts the only thoughts not electrified to the Master Switch “

Keep in mind this was written before the Internet. Now we truly do have government agencies watching our emails, our social media comments, and recording our keystrokes. Couple this with the advertisers targeting us with individual ads shaped from their monitoring of our internet searches. The Master switch indeed. Kerouac saw it coming.

As a lookout, Jack was part of the Fire Management System of the US Forest Service. For many years forest fires were put out as quickly as possible–total suppression. But long after Kerouac’s time on Desolation, fire managers totally changed how they manage. They have gone to selective suppression……letting some fires burn where they won’t injure folks nor destroy buildings, power lines, etc. It now is recognized that fire is part of nature and necessary for the health of the ecosystem. In particular they burn up the “fuel load” that is always accumulating in the forest – trees, dead trees, needles, cones & brush. This periodic zeroing out the organic matter prevents the catastrophic fires that occurred under total suppression. Again, Jack was ahead of his time:

”as for lightning and fires, who, what American individual loses, when a forest burns, and what did Nature do about it for a million years here up to now? “
(Desolation Angels p. 48 )

While Hozomeen Mountain was Kerouac’s favorite, mine is in the opposite direction….. Jack Mountain to the south. Hozomeen directly north is very masculine with naked spires standing straight into the sky, dominant, challenging, aloof. Jack Mountain seen from down on Ross Lake or the North Cascades Highway—- is similar with a jagged profile.

But from top of Desolation—- it is very feminine……with her flanking ridges spread wide and the Nohokomeen glacier sunken into the space between, a bowl shape, a beautiful inviting accepting cirque. In the evening when the world turns romantic and soft……the white snow and ice turns pink and glows. Kerouac can have Hozomeen, I’ll take Jack and Nohokomeen. 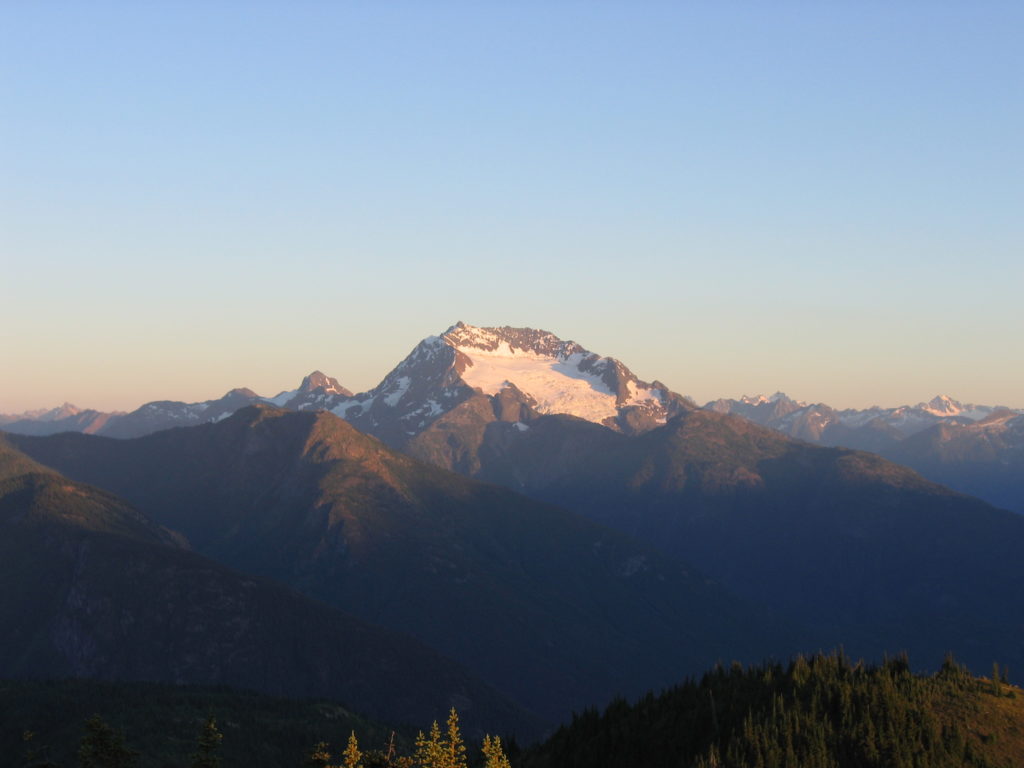