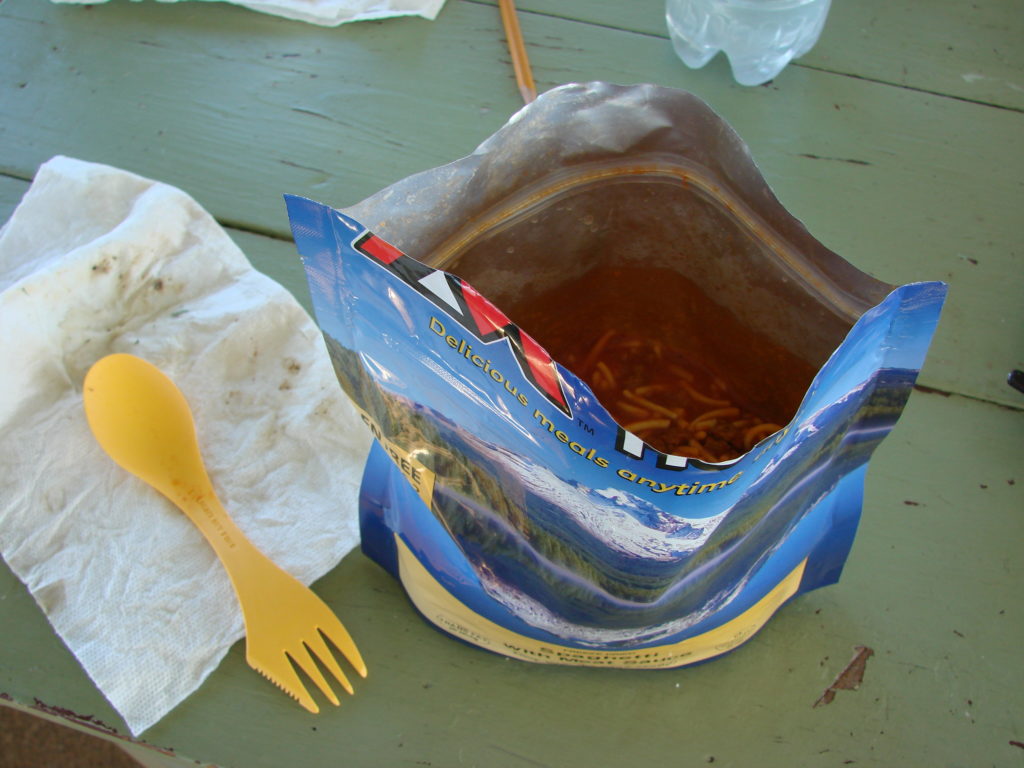 Food is a huge deal. If you man a LO for the whole season, the park service will give you a helicopter sling load of food……say 300 #s worth which can include luxuries like cans and sacks of basic supplies like rice, pasta and potatoes. But if you are a relief LO like myself……you only get what you can carry……essentially a bare minimum and so I set strict rules on eating times. There is NO recreational eating.

This does give my meals an intensity and I savor every flavor, every swallow, and the wonderful growing sense of a happy stomach. I don’t though get a feeling of a full stomach. The amounts don’t permit it. There are metabolic calories in a meal and there are emotional calories. The latter comes with no weight penalty and that is what I rely on to fill me up. If hikers were up at the LO at a mealtime…..I put off the meal and spent time with them. When they have headed down, I slowly enjoy the meal.

Occasionally I will score a little “lookout magic” which is food from the hikers. It is not necessary but always welcome. Its typically a handful of granola, a cookie or an apple slice. One visitor gave me a half dozen slices of dried pineapple coated in sugar. Wow! I hoarded those for days and cut them into little bits. I used to bring chocolate bars up to Marie when she was the LO on Desolation but she seemed pretty unexcited by them……simply laying them aside with a quiet thank you. Finally, one year I brought some fresh Roma tomatoes which are less fragile than vine tomatoes and to my astonishment, she dropped everything, came outside the LO and chomped one right down. It was the only time I ever saw her enthusiastic about anything.

Dinner is set at 6 pm and requires boiling a a cup or two of water, then pouring it into the dehydrated food package and then waiting about 7 minutes or so for it to reconstitute……longer than the directions because of the altitude. Luckily with the pouch closed I couldn’t smell the meal rehydrating. When the wait time was up, I would open the pouch top and using my yellow plastic spork, would s l o w l y eat each spoonful.

Ahhhh….the supper view—- the angle of the evening light, soft shadows emerging, the quiet reprieve from the dying wind. The smell and taste of the food is so welcome. Every time I gave a deep thanks for those things. It is an emotion that is drowned out in the cacophony of the front country and so it catches me by surprise in the backcountry with only a few possessions and no distractions. Every cell in my body says thank you, thank you for this….and the dessert takes no weight in my pack…it is this flooding feeling of total contentment.

My final supper move is to carefully tear the dehydrated package open, laying it flat and licking every remaining calorie. The juice is very good but there is another reason……actually two other reasons. First, I am going to have to carry all my garbage down the mountain and I don’t want any extra weight of retained liquid. Secondly I am fanatical about not dropping any crumps outside my mouth…..I don’t want to attract deer mice, about 15% of which harbor Hantavirus. Presently infections with this virus are not treatable……and they can be lethal. All doctors can do is support your vital signs and wait to see if your body can contain it.  A deputy superintendent of Glacier National Park died of Hantavirus back in 2004.

It is serious business this virus and I so don’t sweep the lookouts anymore either……it raises dust that can could contain mice feces that are infected…which you would inhale. Rather I clean by wiping down with water…..this is limited on Deso because water is precious, very precious. So while I was proud of the “shack” — I couldn’t really scrub it clean…..the dust laid in the corners and on the sills untouched.

On the north side of the summit is a cistern. It is small concrete box about 24 inches square with a lid…… built into the ground to keep snow cool that you pack inside it. This allows you to dip into it as you need water without having to trudge each time to some distant spot where the snow lingers. Some years though there isn’t any snow remaining anywhere close on the mountain by the time the LO is staffed. In that case the NPS will helicopter up a half dozen Cubies —-which I stacked three in a pile with the top one positioned, so the spout is on the side. Then I used a plastic funnel that I brought up…. carefully tilting the box and dribbling water into the funnel with an empty water bottle held underneath. Every drop is valuable and I meticulous about not spilling any.

On Sourdough Mountain though there is usually lots of snow around even in August., A previous lookout had left black plastic “shower” bag behind. This is wonderful because you can pack it with snow and then hang it from a shutter strut. When the melted snow warms into water –you can take a limited shower and with a little shaving cream…give yourself a shave. But on Desolation, things are truly desolate and snow if any is in short supply. I do indulge in a very limited “spit bath” every few days using a washcloth moistened with some water but that is it……the rest is for drinking and cooking. I get used to my smell but any visitor must be bit put off……luckily it is usually windy at midday.

There are rare times up there when there seems to be no sound, no vibration……it is usually a windless evening after the sun goes down and the birds have bedded down for the night, the flies and mosquitos long gone from the day, And a few times, on a firelookout, I have heard a pervasive low pitched distant steady hum. I didn’t know what to make of it until I heard a lecture down in the Grand Canyon by a geologist who spent 3 months hiking the length of the Canyon by himself, seeing almost no one. He heard the hum too and decided it was the sound of friction from the earth spinning inside its own atmosphere. Other people have told me it is the blood coursing thru your ear. I don’t know—- but it is rare to hear it.

At the end of the day before I turn in, one of the last things I do is go outside down to the rock to the north and brush my teeth.

A simple act. Most nights there were stars, thousands upon thousands of them blazing silently overhead. Universes stacking up in my retina. I never learned to accommodate the intensity, never memorized the pattern……I simply reacted in amazement every time. That his huge show could be going on but be totally silently was unfathomable. That the light I was seeing from a star could be a million years old was beyond comprehension. In the dark you can walk around the LO and not see a single artificial light. But looking upward, you can see a whole universe of stars burning overhead and the Milky way forming a large arc in the sky sweeping from Hozomeen over the top of Deso and disappearing across the sky over Thunder Creek. It is truly milky and reminds me of milt that salmon leave over the eggs in a stream, a dotted opalescence of 1/2 worlds of DNA swirling in their cosmos of the water. It is embarrassing to spit out the toothpaste in front of such a magnificent spectacle……I feel like apologizing.