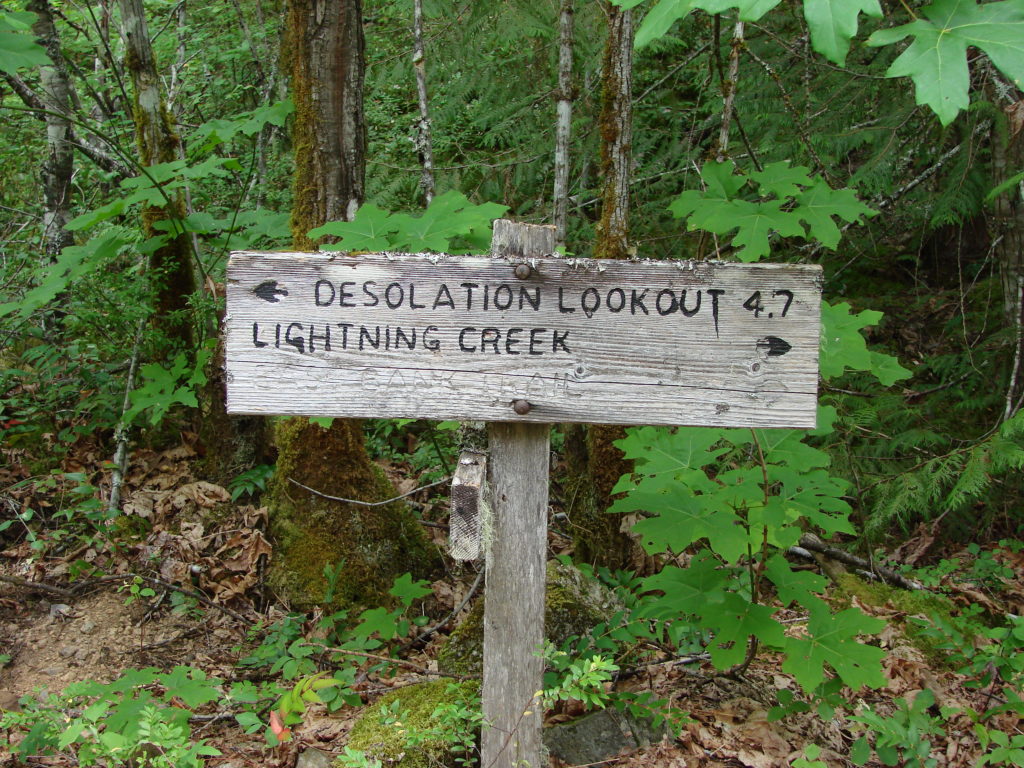 With a hand wave I was off, scrambling up the trail from the lakeside dock to the actual trailhead. After burning thru some initial adrenalin, I settled into my familiar steep uphill backpacking rhythm……30 minutes march and then a 5-minute pack off break. Over and over and over. As you hit sunny patches, the smell changes……from a moist green fresh odor to a hot, dirt, baked smell. Both have the flavor of the Cascades, but it is like two different sauces on the same pile of pasta……your taste buds registering the ying and yang. I ran into a couple of dads and some teenage boys taking a break who told me that they were getting short of water…so I mentioned the spring up at 3725 feet. After a couple of hours, I caught up with them again, filling their water bottles directly from the trickle there at the spring …… no filter nor purifier tablets. Its probably safe but I filter it.

It was a very hot day and I knew that once I broke above tree line with my heavy load that I would need lots of water….and I knew that this was the only source….so I took time to slowly filter an additional 2 liters. Having had Giarda once in the backcountry and remembering 3 straight days of diarrhea, I don’t take any chances. Then I continued upward, seemingly endlessly ever upward. About 30 minutes after the spring you start up an avalanche chute devoid of much shade. Now you are exposed to direct sun and even steeper switchbacks though there is a profusion of wildflowers in here…. 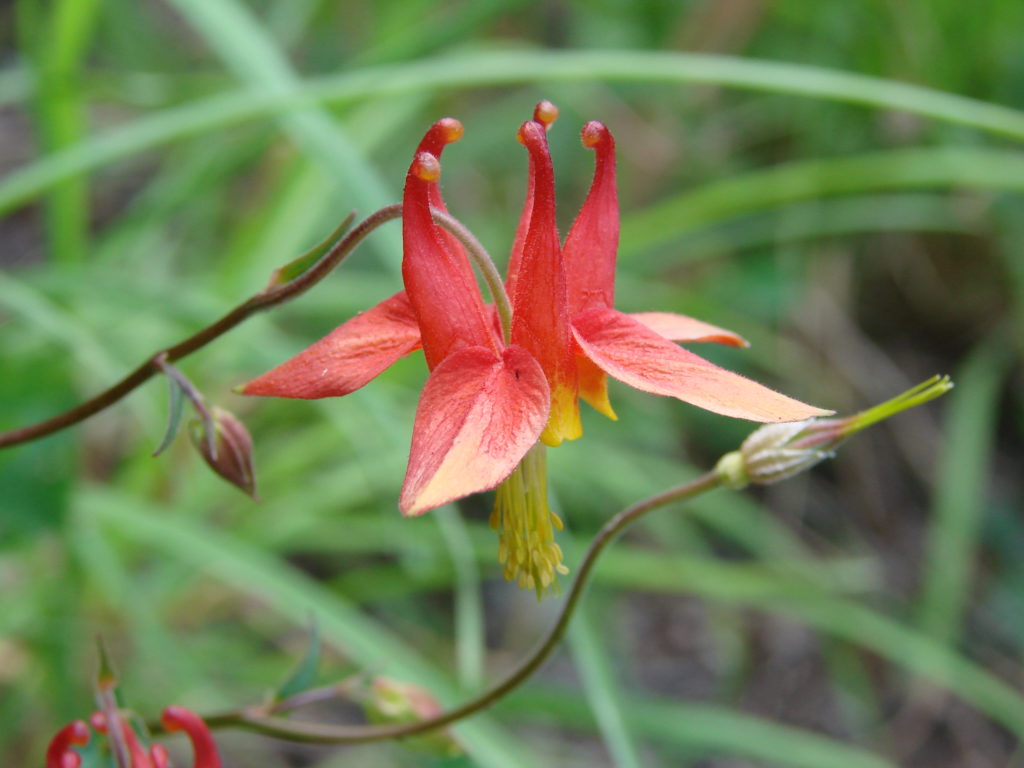 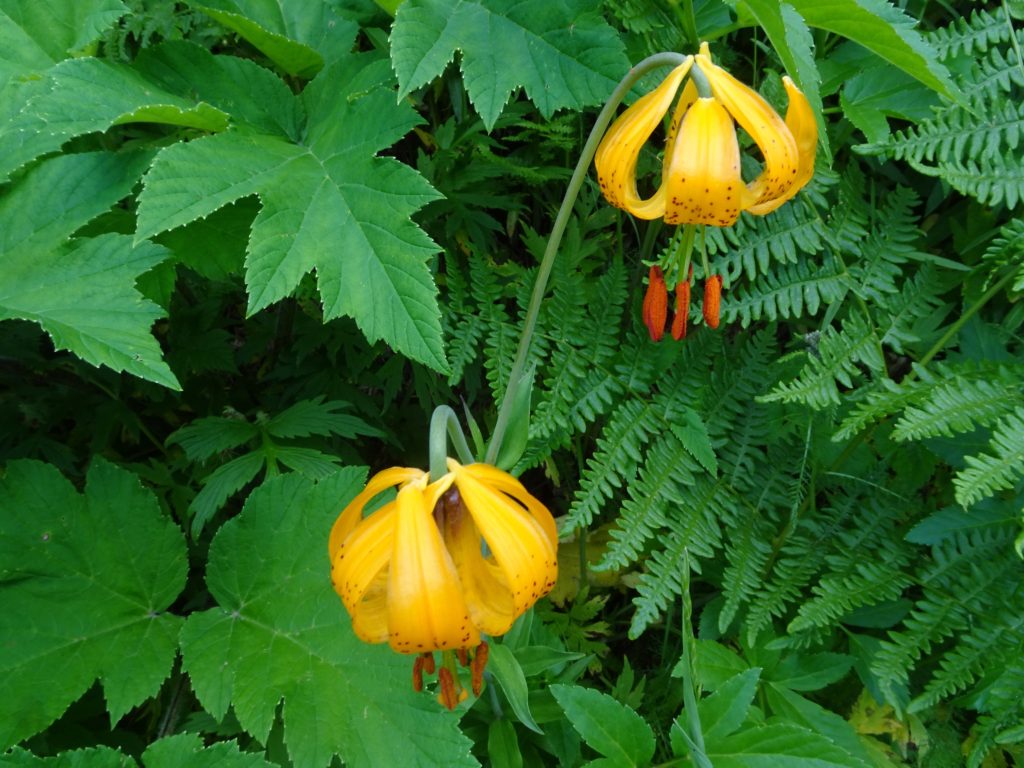 ……So I cut my intervals to every 20 minutes stopping under any foliage I could find for 5 minutes, sipping water and waiting for the pumping of my heart to recede. Just as this pitch eases off, you come upon the “designated “ Desolation campground.  Hauling a backpack up the trail is much more difficult than a daypack. And folks backpacking the trail usually assume assigned campsites are at the top near the lookout……but it is not true……there are only 2 tent pads and they are down here on Starvation Ridge roughly a mile below from the LO.

After the campground the trail steeps up even more and deceptively for 300 yards. In the middle of this pitch I again ran into one of the Dads and his son……the other ones had turned back but these two had pushed on……not quite making it all the way to the top before their turnaround time. The Dad said to me as they descended past me “I sure wish the Lookout was up there”…….I was not in uniform and my National Park Service ballcap was stowed in my pack, too hot to wear….., so he didn’t know…..but I replied with a smile…..”So do I”.

Anytime you turn around above timberline and look back down the trail you will have sweeping views to the south…… of Ross Lake and whole span of the North Cascades. 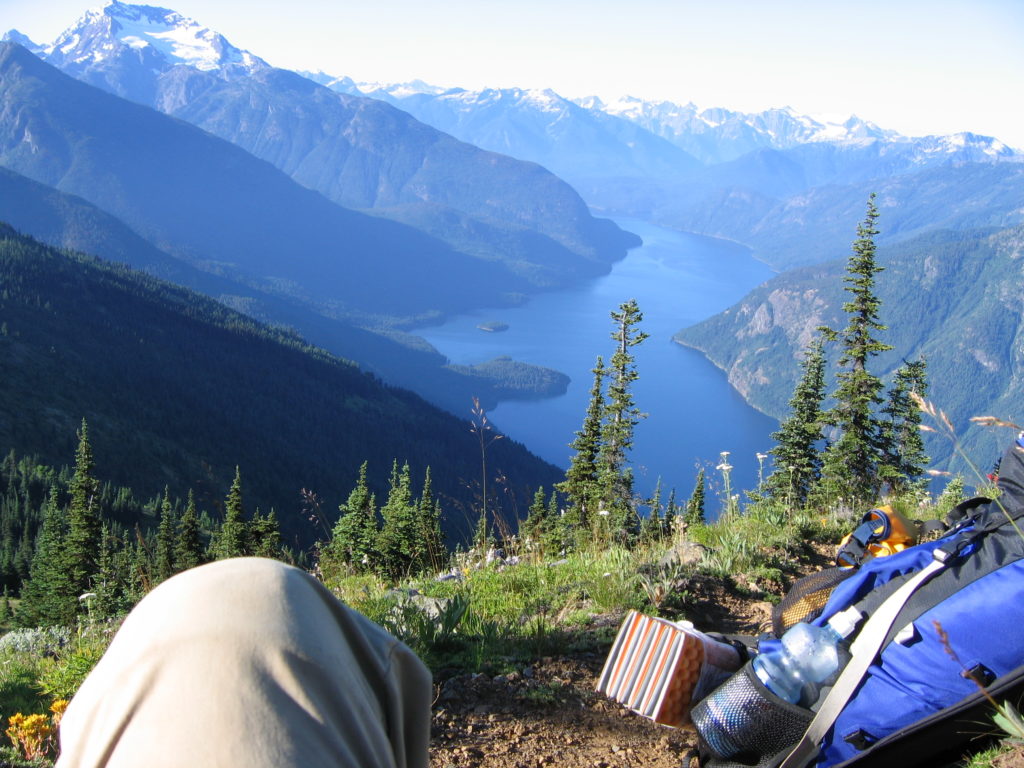 And soon you will also get your first good view of the lookout, a square dot up at the very top. 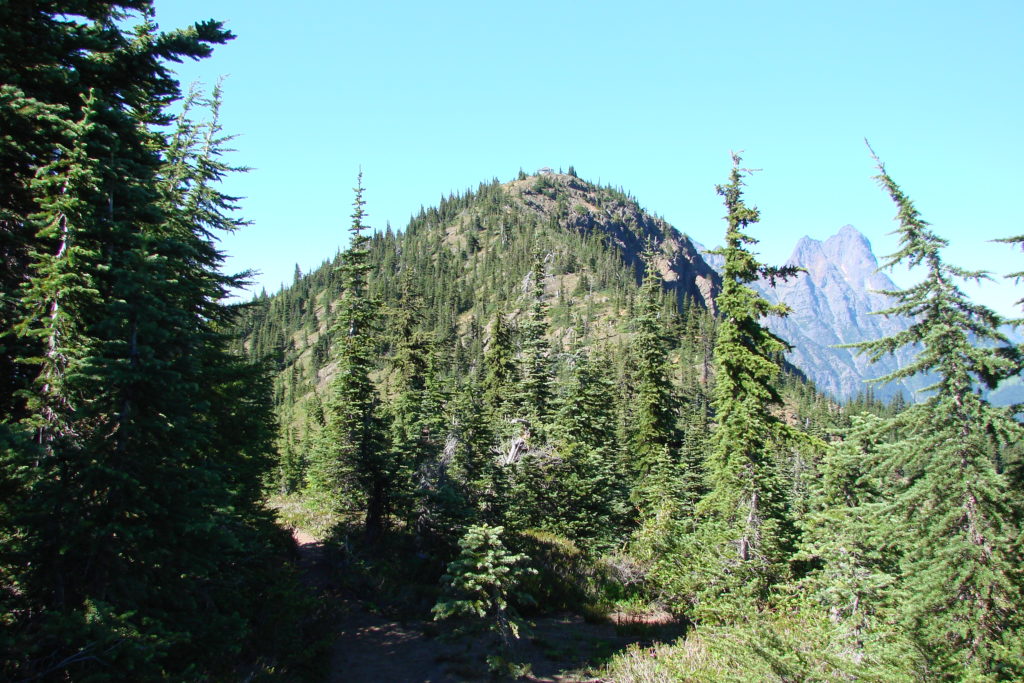 I hiked on up and down along a yet higher ridge with occasional peek a boo views of the LO which was slowly looking larger. Then there is the final short steep slope of dirt, rock and trees, and as you top this rise—- like a vision turned real—– the building materializes right in front of you……sitting silently in the heat. It was 4PM. 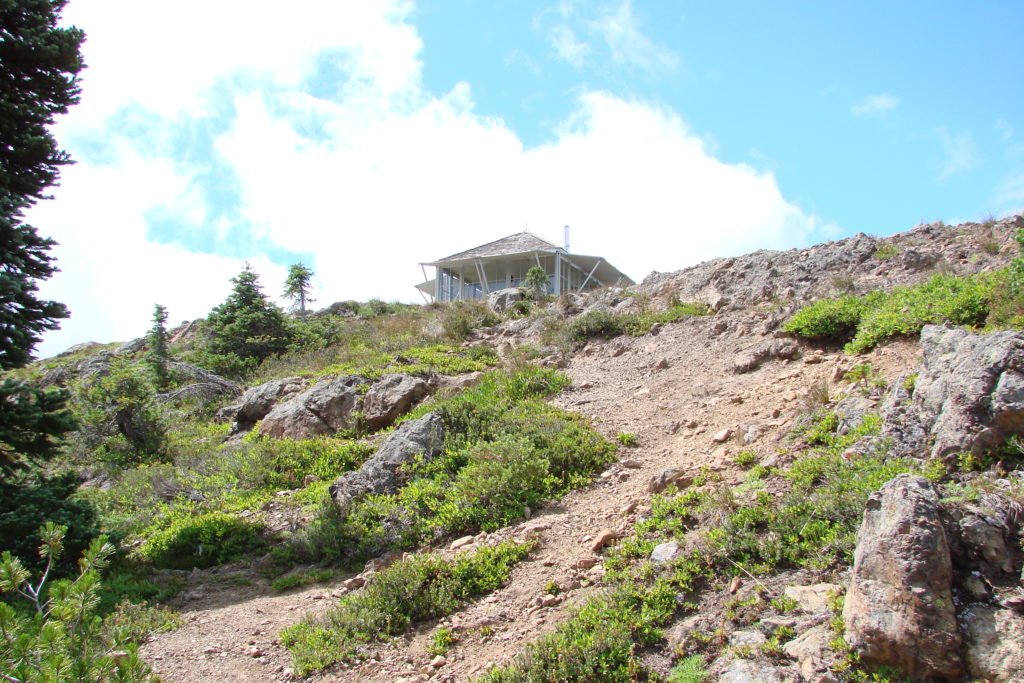 A quick look thru the window by the door showed six intact cubies…..and no obvious vandalism. Then a nervous moment……I pulled the key out of my pants pocket….the one that I had double checked about 10 times coming up the mountain to be sure I had not lost it….slide it into the padlock, twisted and the hasp sprung loose on one end (Yes !) and in a step I was inside. A quick check showed though some of the cubies had chewed cardboard, a mark of the marmots before Jerry had gotten up here to stow them inside…but they hadn’t penetrated the flexible inner liner. The firefinder was there and rotated nicely, none of the windows were broken and the mattress was still on the bed. There was that smell of contained heat and dust. Jerry had also propped open the winter shutters when he brought the water inside…… so that heavy task was already done. It is a tricky task by yourself…… I know from Sourdough Mountain that by carefully using the shutter pole braces you can “walk” the thick wooden shutters up into place one at a time.

I went outside, turned on the propane valve and walked back inside, then panicked as I remembered that I had only brought a few emergency matches…….but looking through toolbox by the north wall…… there were more. I turned on a burner, lit one of the matches, touched it to the element and voila….it sprang to life. And curiously a haiku popped into my mind as well.  ( see Haiku # 9 )

Then the gratitude flooded me……shelter, heat for cooking, water, firefinder & a radio. Oh yes the radio……I turned down the volume now that I was inside to conserve batteries and checked in with Fire Dispatch……

Funny I put the lookout in service at 410PM that first day and out at 5PM. I have to check out for a couple of reasons. The first is that the NPS only allows me 8 hours per day of pay (they had already given me credit for the ride and hike up ) and so they have to log me out so that my pay stops. But the other reason is so that the Fire Service knows that I am ok. Lesha, the NOCA Fire secretary, has Fire people all over this large park with its north and south units and its two adjacent National Recreation Areas. But she checks on everyone twice a day. There is very reassuring when you work alone, miles from anyone. If I didn’t answer several calls I know they would send someone to check on me, if needed with a helicopter.

I opened up some of the windows, which is really pivoting them on pins 1/2 way up the sills……..they swing outward at the bottom and inward at the top. That begins the fly osmosis, the ”insectification” of Brownian motion…..the flies come and go out thru the openings until their density is equal outside and inside and their buzzing is a steady traffic of noise…landings and takeoffs, crashing into each other and the glass panes….they are very busy but I don’t know at what…..on Deso they don’t seem to bite as much as other places. I have tried in some lookouts to close the whole place up, kill all the flies inside and then relaxing……but it doesn’t work…..the solar gain is incredible from the 360 degree wrap of windows and in a half hour…..you are mad with the heat….baked for your defiance….and you have to relent. 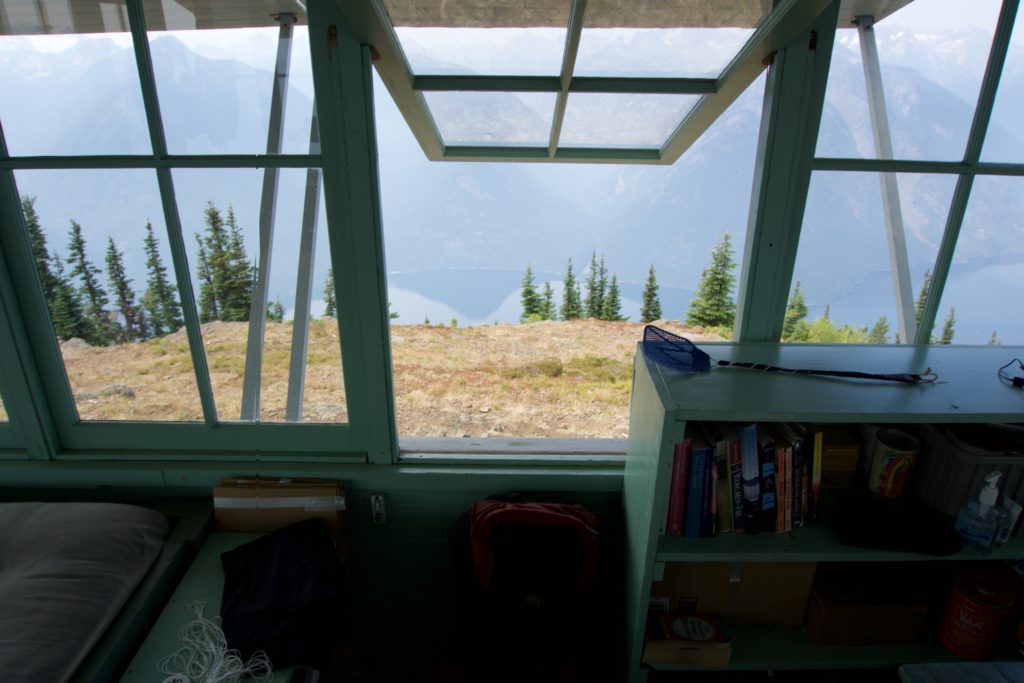