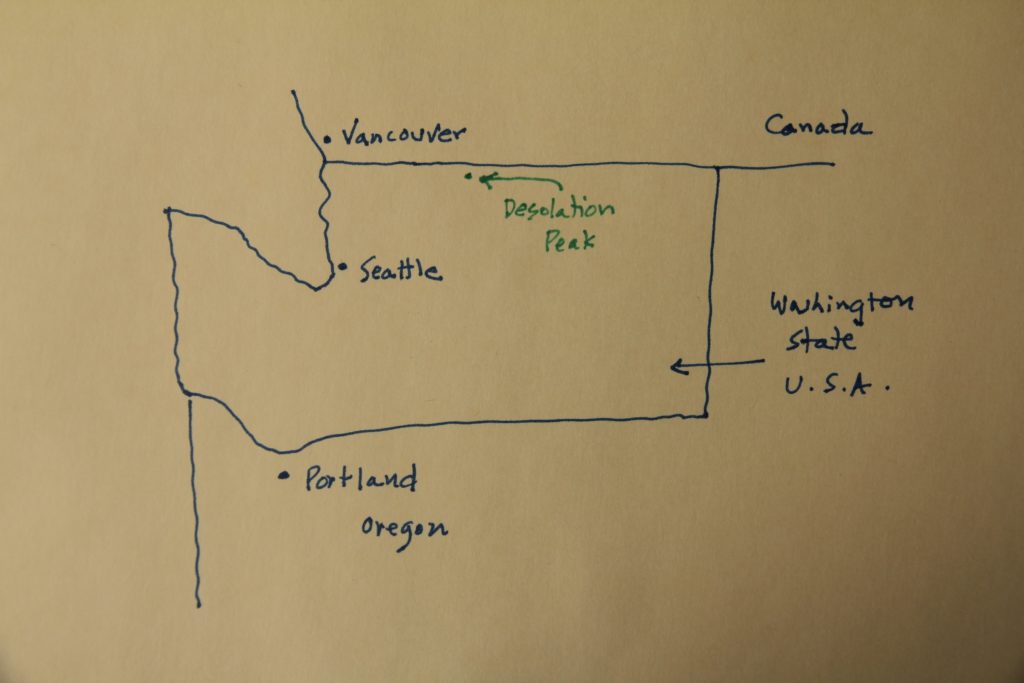 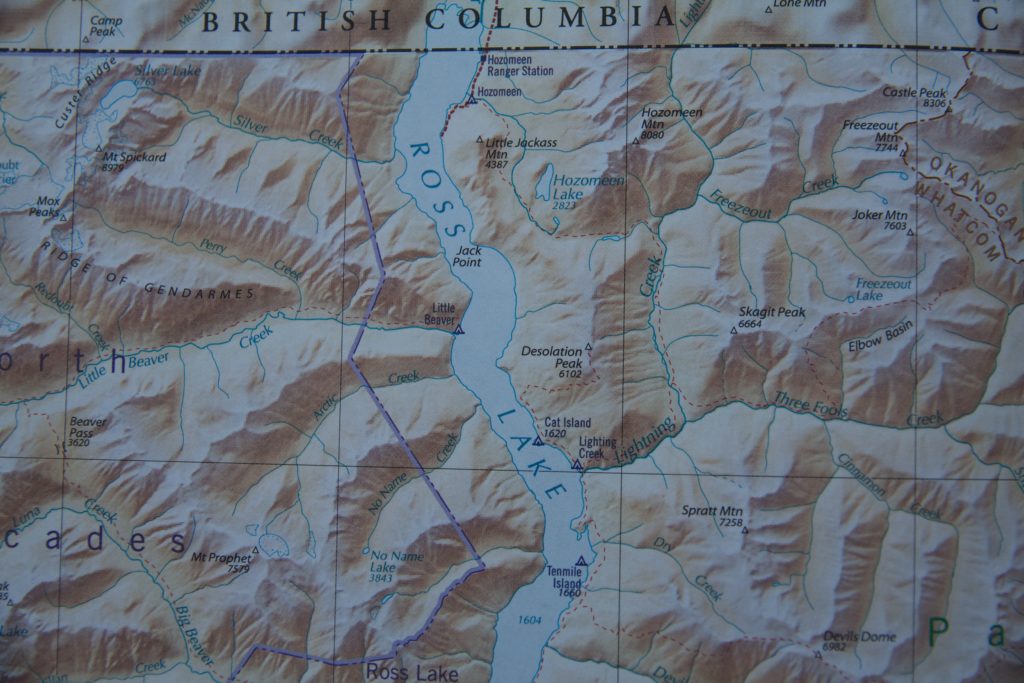 There are four main ways to get the Peak……and thus to the lookout:

One is the East Bank Trail which takes off from a North Cascades Pass Highway trailhead and works its way north over Hidden Hand Pass and along the east shore of Ross Lake. After 22 miles it dead ends at the start of the Desolation Peak Trail.

A second way is to come in from Canada hiking below Freezeout Mountain around to Lightning Creek then over to the East Bank Trail and finally back up to the Desolation Trail.

The third way is for you to take your boat, kayak or canoe down from Hozomeen campground, or up from Ross Dam to the Desolation dock.

The most common way to get there though is the fourth way……by water taxi up the lake from Ross Lake Resort to the Desolation dock, and then hike the 50-yard connector trail from the lakeshore up to the trailhead. The Desolation trail, once you get started on it…… switchbacks a total of 4400 feet upward in relentless fashion, over 5 dusty miles to the top. 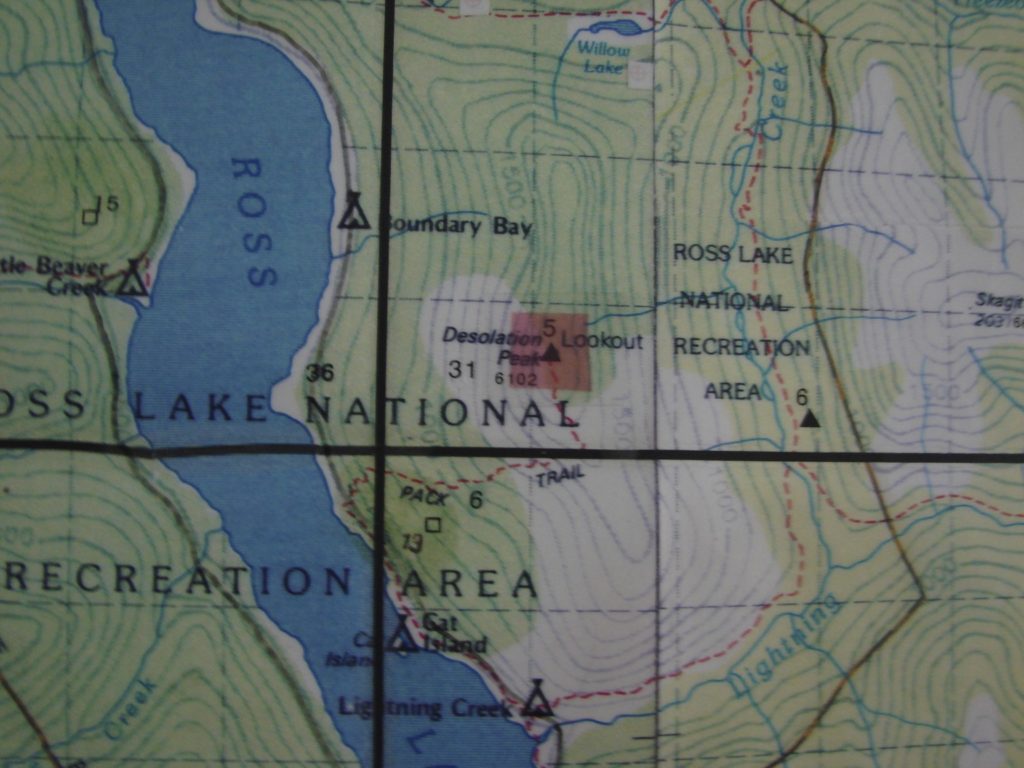 Desolation Peak and the Lookout would probably be just another fire lookout in the Cascade Range; except for the fact that in the summer of 1956 it was manned by Jack Kerouac, who later became a major American author. His best-known works are Dharma Bums and On the Road, but he also wrote Desolation Angels. That book in particular details his time and thoughts on the peak…. though Dharma Bums and Lonesome Traveler also talk about the experience. For 66 days he didn’t have a single visitor, though he did make one trip down to the lake for tobacco from a work crew. Jack also wrote poetry, and in the Book of Blues is a twelve-stanza poem entitled  “Desolation Blues”.

Fifty+ years later there isn’t much in the way of direct signs of Jack’s term up there. But there are plenty of indirect signs. They include a small collection of books about him that people have left at the LO and for many years there was a post marking the campground a mile below the LO at the top on which someone had carved “Hi Jack”. 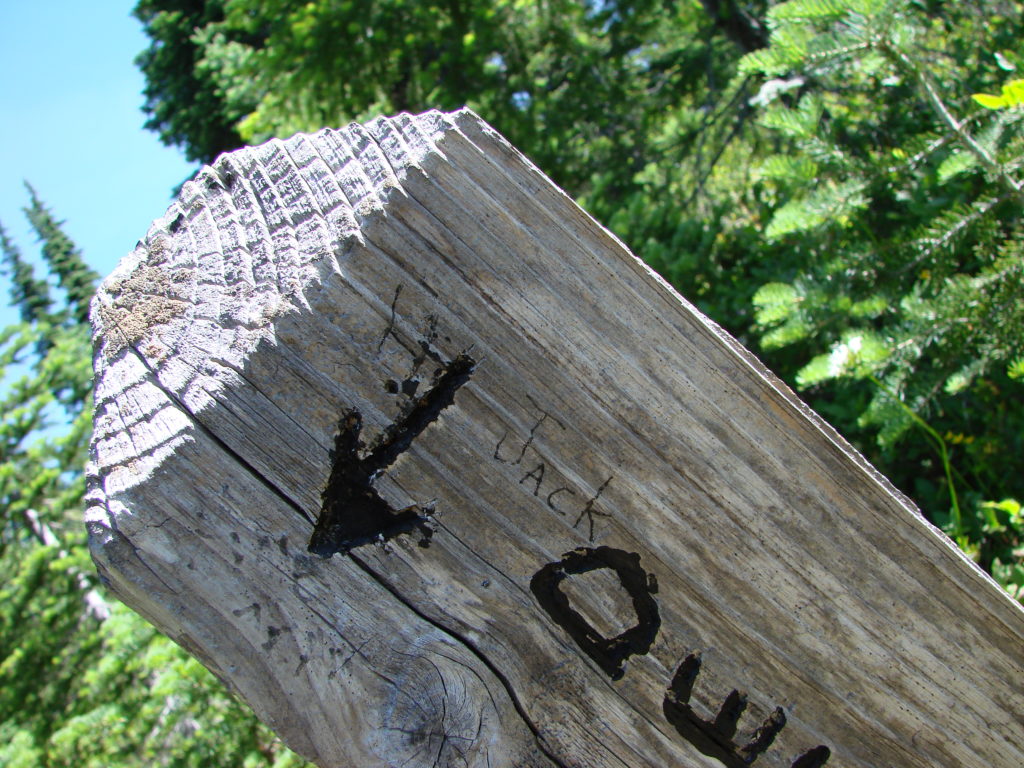 Unfortunately, it rotted away and was replaced with a new post that has no carvings (so far). You can’t camp legally up at the LO, but one time I did with permission from Marie, the lookout who was on duty that year. I set up on a bare patch just to the northeast of the building where the helicopters land. She said that I wouldn’t get a wink of sleep because the marmots would be jumping on and off the tent all night…..but they didn’t bother me a bit. I think they like to sleep too.

The official campground where you ordinarily camp is 1000 feet plus a mile by trail below. There, the deer are real pests. They usually come through grazing around 1 am, and in my paranoid tinged solo wilderness sleep, they sound like bears……The first time this happened I yelled at them in the darkness and then startled – they tripped over the tent cords, bringing down the tent on top of me. This put me in full panic until I burrowed out from under the fabric, shone my flashlight, and saw that they were just deer.

Another time when I was up visiting Marie, she cooked a nice dinner using some of her precious tofu. I had brought fresh Roma tomatoes and we enjoyed a quiet meal together swapping lookout stories. When it was getting pretty dark, I said to her…. “ Well, I got to be headed down to the campground now for the night,” and grabbed my pack, and made for the door. Marie, in a moment of helpfulness and concern said, “Be careful down there by yourself……last week that big aggressive cinnamon bear was ranging all over the mountain …….in fact a cougar killed a deer down by where you are camped, and that bear dragged the carcass away……”

As I hiked down thru the woods in the gathering darkness —I thought yikes!

So, after brushing my teeth that night, I put the toothbrush and paste in the bear canister with the rest of my food and solidly wedged it between two large rocks a good 50 feet away from my tent. The trees at that elevation are not near high enough for hanging your food. I then climbed into my bag……my brain cocked on alert all night listening for lethal animals……. finally succumbing to exhaustion at dawn……later I woke up about 10 in the morning in full sun…… thankful to be alive. I packed up and headed down the trail with every sight and smell amplified by my joy.

If you serve up there as a lookout, you will meet on good weather days pilgrims coming to see where Jack stood, wrote, & slept. I was surprised that people still make the journey— but they do almost every day in July and August. Many have a copy of their favorite Kerouac book or have Xeroxed some memorable passages. Most have been intending to get there for years and have finally made it. They are excited to see it for themselves, pretty much unchanged despite a half century. I often asked them if they want me to take their picture sitting at the table where Jack sat? They usually like this idea and so I take a couple of shots with their camera or phone. Some preferred to be standing behind the rotating firefinder, and many want themselves standing next to the lookout building with Hozomeen Mountain in the background.

That view to the north and in particular Mt. Hozomeen, weighed heavily in his writings. It is a very distinctively shaped jagged, naked mountain– very close— seemingly within a stone’s throw…… two knife edged triangular spires rising adjacent to each other like ears of an animal. The bed in the lookout faces north, and that first night that Jack was there……. the blanketing fog cleared in the middle of the night and he woke up startled to see a looming black shape with triangular ears staring in the windows at him. A really big bear….. 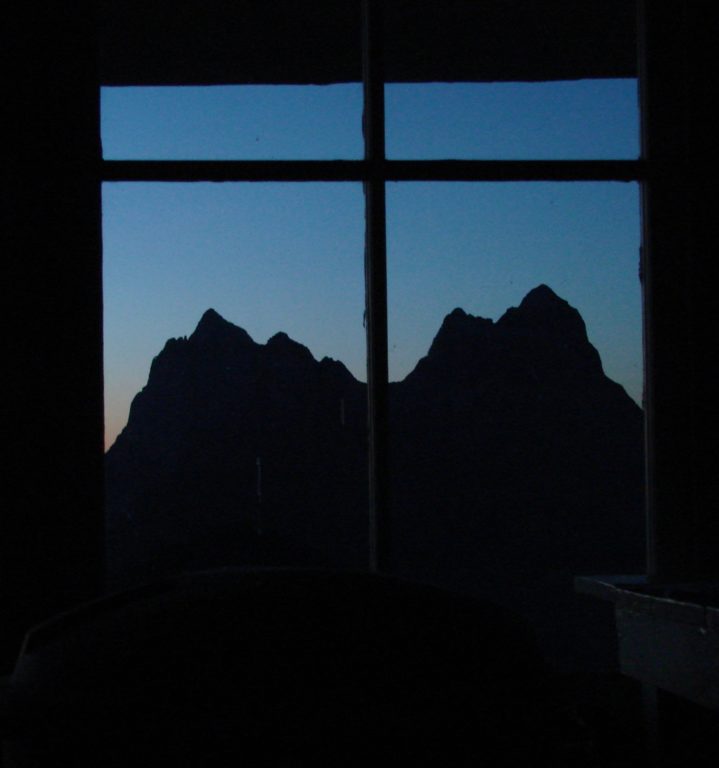 My job, like Jack’s was to watch for fires……but that is ahead of my story. First, I had to get there.