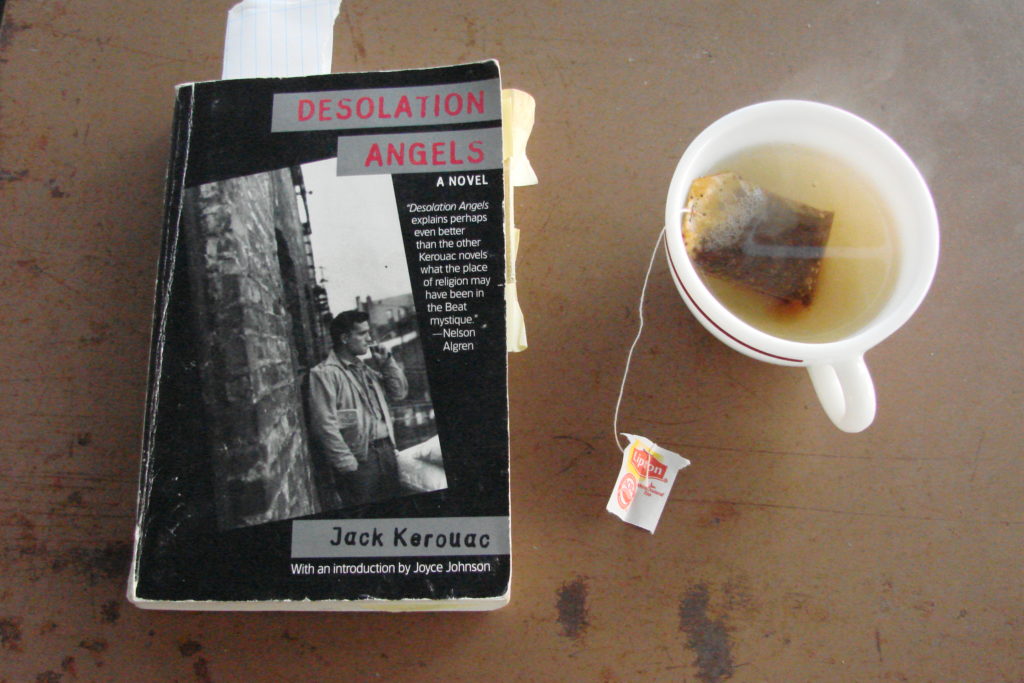 heY Jack ………..DesOlation LO stands there manned by lookouts sTill and the country Looks pretty much the same. its now a national park and will be saved from ClearCuts and hey they let fires burn now as long as people and buildings aren’t in the WAY….yoU donE some gOOd with yr worDs. the wOOdstove is gone though don’t know where….. too bad cause on a foGGgy day when the cold sets in i could use it …… no wood to chop the fire boss say… but hEy the RhyThM of the stroke and cLeaving of the FiBeRs and the cracKle of kindling PoPPing and breathINg…a fire like a friend. Damn. PolyProProlene underwear is recommended.. but hell it AIN’t living no more…. once was when it breathed a million years ago then died and then got squished into oil and then spun into this lifeless fabric….damn i miss wOOd warmth and sound and reassurance…. the stove propane IS more of that dead Foliage made into gas by the ages and then put in a metal cylinder…… it warms my food real faSt cept faSt doesnt fit the mOOd up here …I am on glacieR time, Star time yu reMeMber ?

heY Jack you still live out Here cause the PeOple still come almost EVeryday…angels and pilgrims looking for yU wanting yU…. your words mean a lot to a lot to theM cause some of your ThoughTs are theirs tOO and they got sOme of the dHarma thru yU and they want to thank yU and tell yu that yu were right and Yu know they come to see the void which is unseeable but they stand there looking toward old Hozomeen same as it was and LOoking and thinking and seeing and trying out the vOId sometimes I wish the there was a deep black hole over there 1/2 way to hoZo and then I could point it out and they would nod and know and feel like they had seen it……But heLL then they would take a photograph and FeeL like they captured it and were done with it…..

Hey jack one night these two catS come up and asked me if there was any snOw up here and I told them not that i found and I looked believe me…… that cardboard Cubies stuff that the helicopter brought is ok but there isn’t any taste tOO it but wet ….snowmelt is much better it goes straight into Yr cells and them cells recognize iT……..speaking of that.. these two catS hunt all around, they come back lOOking saD but I invited them in sit down inside and then one sez we needed snow for our Gin and tOnics but we couldn’t find any either….. well hell I said that wouldn’t have bothered old Jack and the one cat he pulls out the bOttle and sez iTSs Gin from Bend which is near Warm Springs by that beautiful Deschutes a river that just sounds like it flows cold free and clear where Synder done time i think he told yU about that……anyway the thrEE of us decide to drink it STRAIGHT cept with a little lime juice…..those cats had a real lime which we cut up and squeezed and then they left the rind for me and i even got mOre out for 3 days in my water…..anyway I think yu would have liked it tOO….. we got talking the daRhma and it got beTTer and beTTer and hell we got a lot of stuff figured out righT there and when we were done it was dark. dang dark and the universes above were burNin, spiNNing glOWing and I wished them caTS well as they stUmbBled down the trail and disappeared real Quick over the liP…. My haPPy life was finally clear and them guys helped me sEE it… but the next morning when i went to write it down i couldn’t remember much….. but them cats said they were coming uP for sunRise but I didn’t see’m them again so i guess they tOOk my thoughts with em

the winD blows still swirling around and looking for raTTles and it fEEds itself….. you remember ?…. till the shuTTers are flung up on their braces and the shack shuTTers and tries to pull free….. at night i worry that i am going to be blown off the mountain with the wind coming under the floor and I could end up all BusteD uP in a pile of Sticks down the slOpe but then I wake up with the sunLiGHt eXploDing in and its morning…. remember how it is— sTill —noth’en moving cept a few molecules separated by the Flies out to get thrU the quiet and how you can hear all the way to the lAKe with birdSound and beastSound and warmRock thoughtS and dirt smeLLing and buTTerflieS singing and the big bully in the sky starting to cook everything and that AChe how goddamn beautiful it is and everything just feels like it could go on forever and you being here is exactly RighT….. every decision in your life has been gOOd and ladyLuck is gonna keep roLLing your dice….. funny how the light banishes the Fears and Doubts and your miND is washed clean agaiN and your bad things WILL happen voice…. has evaPorated. I can feel yU in the early morning and the late evening old Duluoz smiling and the echOs of your mind bounCing inside Mine. Damn jack why did you have to go and kill yrself with alcOhoL? Was the beauty and mystery of Life tOO much ? LOta of what yU said come tRue and I would like to shake yr Hand and look you in th EyE and lauGH. I guess it was all tOO much…… this life.