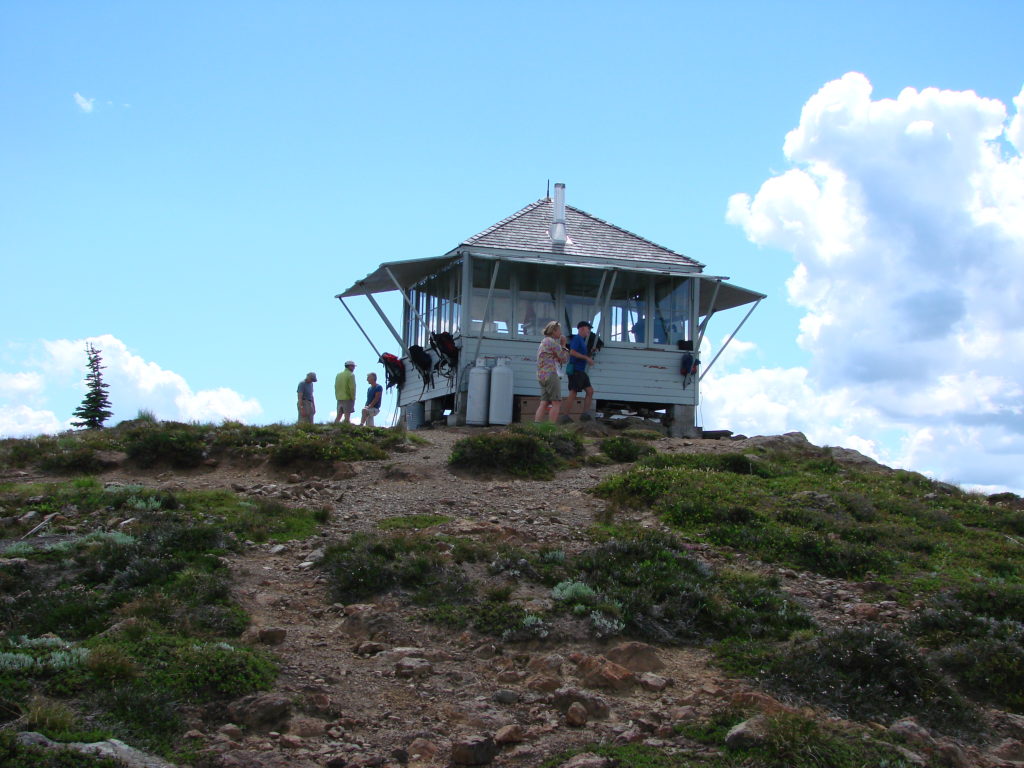 Midday the marmots and I await the next big event ……the arrival of any day hikers. They usually stay for a few minutes to an hour or two and then descend. It’s a long steady 4200 foot climb up from the lake and everyone is happy to finally get to the top. Curiously, many hardly talk to me……they talk among themselves and then spread out on the rocks and meadow on the west side of the LO, looking down at Ross Lake and eat their lunch. An occasional one is out of water and I share a little bit with them but emphasize the spring on the way down.

Some are reflective and have brought their favorite Kerouac quotes with them to read either silently or aloud. I go out and greet all of them all unless they give off body language that they want to be left alone. I warn them about Trouble and not to leave packs on the ground…but to instead hang them off the shutter struts or leave them with me in the LO. And I point the direction of the privy and if it is windy remind them to hold on to the cables. Women in particular like the idea of a toilet but often come back after a look at the cliff edge and the fact that it is not enclosed at all and I think they have decided to “hold it” until they are back in the thick trees.

I am though always excited to be manning a lookout and so if they seem interested I give them the full tour……pointing out the neighboring peaks, demonstrating the firefinder, letting them sit at Kerouac’s desk  etc…… If they are here indeed because of Kerouac, then I ask them why he has made such an impression, and this gets them talking. and helps enrich their experience.  Though the lookout works for ” Fire ” — I also try to do some interpretation.  If they are staying at the campground, a common thing on Deso and unusual on Sourdough, I invite them back up for sunset or for sunrise.

Amazingly some have no idea about the history of the place, nor have ever heard of Beat poets……to them it’s just another day hike. And sometimes you get the sort of exchange like I had one day with one lady who looked like a fashion model in a Nordstrom window…..

“Where do you sleep?”
“I sleep right over there, that’s my sleeping bag on the bed.”

“So you are all alone at night?”
“Well, I have the marmots, the birds, squirrels, rabbits and bears.”

“The bears…..don’t you worry about them?”

“Desolation Peak is famous for its bears alright, but I figure they are after the huckleberries not me…..still I keep my food in a plastic garbage sack inside the toolbox over there to avoid scents.”

“Oh god I wouldn’t sleep a wink, not a wink. Aren’t you afraid?”

“Well, yes after dark I think about the proximity to Canada and all those grizzlies.  There is no fence at the border to stop them wandering down here”

“Food I hike up with, mostly dry food and dehydrated packets for dinner.”

“Is that stove you cook on?”

“Yes, it works well, I have plenty of propane.”

“Oh nice, is that your refrigerator?”

“Well, how do you keep stuff cold?”

“I can’t keep anything cold, unless there is some snow left……but none this year.”

“What’s in all these boxes?”

“Well that’s my water, its flown up by helicopter.”

“Where does your electricity come from?”

“Nowhere, I don’t have any power except for batteries.”

“You mean you got no lights at night? no electricity?”

“Well its light pretty late up here, but yes once its dark I get into my sleeping bag, listen to a couple of songs on my ipod and then go to sleep.”

But the ones, pilgrims I call them, who are familiar with the Beats, have often wanted for years to climb Desolation and only now have made it. It’s not the kind of place that you stumble across car camping or “driving the pass”. You have to want to come here, seek it out and struggle up the trail. Mostly you have a reason to make the huge effort and its usually Kerouac.

Since there are no curtains on the LO windows, I get up at daybreak. However, one morning I stood up at first light and was astonished to see a young woman standing 20 feet away just outside with a pair of binoculars…..luckily she was looking the opposite direction because I was standing there in my skivvies. It turned out she was doing a bird count for the NPS and had started hiking up the Deso trail at 2 AM so she could be on top at sunrise when the birds became active. That was a new one.

Another day a solitary hiker scared me briefly, who pulled out a big Bowie knife while sitting next to me in the lookout—  only to  fish a block of cheese out of his other coat pocket and proceeded to cut pieces for lunch.

One evening two older guys knocked on the door and asked if I knew where there was any snow? I told them— not that I had found. So they wandered all over the top looking for some but had no luck. Then they came back to the lookout and asked if I would mind if they sat in the lookout? They said it was a very special place for them. I said sure. Gratefully they sat down and proceeded to make themselves each a gin and tonic. So now I knew why they wanted snow. They offered me one too and mentioned the gin was from Bend Oregon, local stuff, and I accepted. ( See Haiku # 4 ) . All three of us toasted “Jack “……just then a gust of wind picked up the shutters and set them down hard on their struts again. We took it as an acknowledgement from the Void or maybe Jack himself. Having now made the cosmic connection, we proceeded to have another one each. To my delight they left me a squeezed lime which flavored my water for a couple of days. They planned to spend the night at the campground below, come up for sunrise and then tomorrow they would hike down and retrieve those two cold beers they had thrown in a gunny sack and stashed in the cold lake. ( See Haiku #1 ). That image haunted me for several days as the sun beat down relentlessly and the wind died to nothing.

In the late afternoon, long after the hikers have left……and unnoticeable unless you are tuned into it……the flies suddenly disappear and the buzzing ceases. The only ones left are the ones who have died on the table, the firefinder, the window sills, the tool box, the stool, the Cubies, the floor and the shelves. I think their disappearance has to do with the temperature. The tormentors land somewhere for the night though the temperature decline is imperceptible to me. It’s an example of one of the greatest things about the LO……the little pleasures come with no effort on your part. They are just embedded in the flow of events and spike your joy meter with the realization that you have received another gift. In the front country down below………life is so complicated and hectic…… these sorts of spikes often don’t register above life’s noise.